Every year during MIT’s Independent Activities Period (IAP), Professor Patrick Winston gives a wonderfully reflexive and recursive talk about giving talks titled How to Speak. This lecture provides some useful speaking heuristics, especially if you’re in the business of helping people learn. This year the talk will be given Friday, Feburary 1 at 11am in room 6-120, but for those not in Boston, you can watch his 1999 performance in full (albeit a tad bit out-of-date):

The fifth anniversary of September 11, 2001 was much more respectful than I expected. It seemed that most people remembered the day with a somber reverence that was personal to their experience. One memorial that struck a chord in me took place at MIT: 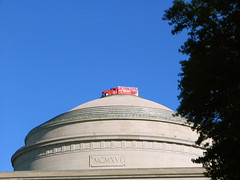 In a manner only possible on MIT’s campus, and probably only relevant to the greater MIT community, someone stuck a firetruck atop the Great Dome. I received a few emails on mailing lists today about a hack, but it wasn’t until I checked my flickr stream that I realized what was going on. To be honest, I didn’t even get it for a few moments. It’s a beautiful piece of work.

After only a few weeks in my new job I have the opportunity to head back to my alma mater. As it would turn out, the Media Laboratory is having its 20th anniversary, and that, of course, is time for celebration! I’m sure that in the past month they have invented 2.5 new ways of looking at the world, started 5 new blogs, signed 2 new corporate sponsors, and soldered 1,800 blinking LEDs.

That said, I’ll be in the Boston area for the next four days, so give me a holler if you’re around, or just wave at me. I’ll be the guy wearing a giant purple jumpsuit with a giant Y! on the back and yodeling.

There’s a funny joke about buildings designed by Frank Gehry. It goes something like this: first you pay millions of dollars to erect the thing, then you spend millions over many years to stop it from leaking. Having friends in the Ray and Maria Stata Center here at MIT, I’ve heard of a fair number of drips. So the water on the outside will eventually be kept outside. Yay for caulk. What happens to a Gehry building when it rains on the inside?

The Stata gets wet

Last night the Stata Center witnessed a serious test of engineering when a fire alarm triggered the sprinkler system on the 4th floor. The water sprayed long enough that it began to collect and eventually find its way down to the ground floor. I was called in to document the situation:

The damage seemed pretty extensive, but I have no conception of what it takes to repair slabs of sheet rock that meet at a 124° angle constrained to a circle that intersecting a glass roof. Something tells me the materials are cheap but the rocket scientists who install it are expensive.

At about 1pm this afternoon, the entire MIT campus suffered a complete power outage, the first time such an event has occured in my 5-year tenure here. I was in the lab at when the power cut, and I was lucky enough to catch the sound of some 50 computers just outside my office spinning down simultaneously. The power was off for about three hours, at which point we began picking up the pieces of our poor, beaten network.

MIT maintains their own power cogeneration plant which supplies the campus and a good part of Cambridge through an exchange with NStar Electric. Talking with friends in the area it appears that much of the city went offline for some time, but was restored long before MIT powered up. This outage doesn’t seem to appear on the New England power consumption stats, but I assume that is because MIT maintains its own grid. Thankfully, MIT maintains its own statistics on the cogenration site, which I’ve cached below:

There hasn’t been any news yet as to the cause, but I would expect it to at least make the local news (it seems like a pretty major event, considering that it took a full 3 hours to restore power to the campus). It wasn’t anywhere near the magnitude of the recent blackout in New York, but it did have a similar socializing effect, as people crawled out from under their desks and scurried outside into the jarring sunlight. Frankly I’d be happier if they threw the switch on a regular basis, just to test people’s ability to communicate face-to-face, a sort of fire drill for social interaction.

May 4: The MIT newspaper has covered the story, citing that an outage of this magnitude has happened only once in recent history.

The Globe reports that many Verizon customers lost voicemail when their data center in Cambridge went offline yesterday.

One of the wonderful things about being an MIT student is witnessing all of the nerd pride and anti-Harvard sentiment. Like this beautiful piece of hackdom:

Apparently the photo was edited and a 4-letter word removed from the third line of the sign. I guess us MIT students aren’t just nerds, we’re also a bit witty.

Oliver Smoot is one of the quintessential pieces of MIT folklore: in 1962 as a pledge of Lambda Chi Alpha Mr. Smoot was flipped over 365 times to measure the Harvard bridge while his fraternity brothers marked off important milestones along the way. Smoot was deemed a unit of measurement, and the Harvard bridge listed at 364.4 Smoots plus an ear. In Smoot’s words:

As with many pledge tasks, there was an easy way out if a little ingenuity was exercised — namely use a string. In any case, Pete, Gordon, Nate and Bill agreed to help us and we set off with the paint, chalk, etc. Unfortunately, a brother in the class of ’61 thought this task was so hilarious that he accompanied us. With him there, we had no choice but to do the actual measurements. I can tell you that even then I could not do the equivalent of 365 push-ups, so much of the way I was carried or dragged.

Cut to 42 years later. Oliver P. Smoot is now chairman of the American National Standards Institute (ANSI). He is being forced to step down because he has just accepted the position of president of the International Standards Organization.

Is it just irony that a unit of measurement was elected to be the Grand Poobah of international standards? Or is it that Smoot has been cast into this position by that one fateful night, unable to escape his role as a measuring stick? Or perhaps he is an obsessed megalomaniac who will settle for nothing less than the Smoot being recognized as the basis for all measurement?

In any event, I’m sure his position is quite deserved, as in the past he has shown us all that he is a great ruler.

Over the MIT Independent Activities Period (IAP) I’ll be teaching a course about the recent trend of power laws in various academic disciplines and applications, from disease propogation to weblogs. The course will be held over the month of January and include a few guest lecutures by researchers doing some of the most important work in this area. The course webpage can be found here:

Furthermore we’re hoping the site will become a repository for papers on the topic and the debate over what place power laws have in the grander academic world.

A team of MIT students under the direction of a quirky math professor moonlight as blackjack sharks, pulling a profit for investors by academically outwitting casinos. This has been a rumor I’ve heard on and off for the past three years; sometimes rumors are true, and they turn out to be bigger than you ever would have expected. This story is the subject of a new biography by Ben Mezrich to be released shortly.

For some reason the hype surrounding this book slipped past me. It’s the type of story that lingers in the air after someone has told it, a story about some nerdy kids no one would expect to have a social life, much less two or three consisting of invented identities and illegal behavior. And the best part, of course, is that they get away with it. A recent article in Wired by the author outlines the book, and left me asking for much, much more. [via b3ta]

Amazon: Bringing Down the House: The Inside Story of Six Mit Students Who Took Vegas for Millions