For Christmas I received an amazing sculpture from my fiancÃ©e who apparently is some sort of gift-memory genius. We saw a few of Gordon Bennett’s robot sculptures at the Wired pop-up store in Soho and she did some pretty amazing detective work to get one. This robot is named Foster and comes from the Bennett Robot Works: 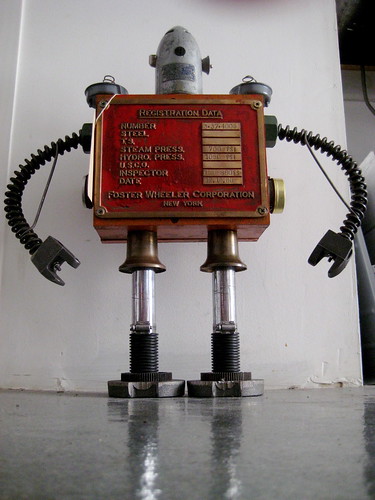 These sculptures, created by Gordon Bennett are made from a mixture of found objects which are both old and new. The parts are found in various places including garbage dumps, basements, construction sites, and garage sales. They are inspired by Norman Bel Geddes and Raymond Loewy whose visions of the “Modern Age” helped shape the industrial designs of the 40’s and 50’s. The materials are wood, metal, bakelite, glass, plastic, rubber and paint. Each robot is a unique, one-of-a-kind sculpture and receives its own numbered metal tag as proof it’s an authentic Bennet Robot Works robot.

Here’s Looking At You is a brilliant short film by Lenka Clayton and James Price which exposes how people judge each other on first impression. Beyond all of the depressing skepticism that these subjects expose, I find it fascinating how much information people draw from a nearly-still image. It definitely shows how important a photo can be in dictating first impressions (via kottke).

Brand New discusses the recent change to the Xerox Logo which takes a classic brand and turns it into some 3D garbage reminiscent of 2001. Why? “The Internet, sponsorships, all kinds of 3D icons â€” none of that existed when Xerox adopted its old logo… and you can do animation with a symbol that you just can’t do with a wordmark.”

It’s days like this, where the unexpected rain forces exceptional stress on the public transit system and thousands of unhappy commuters bump into each other, wishing they had their summer back and that the world was a little more civil. A little more like this:

The Polite Umbrella is an art project by Joo Youn Paek that allows a nice person to adapt the shape of their umbrella and respect personal space by pulling on some strings on the handle. I think they should be mandatory in New York.

My friend Dan Paluska is working on an art project in the suburbs of Paris with Chico MacMurtrie called totemobile. I’m sure they have some fancy art words to describe it, but this is how I see things. First, there was the dancing CitroÃ«n:

People laughed. People cried. People feared that Transformers are coming to earth, and that most of them are coming here to destroy us. Then, a fan film emerged that taught us two things: 1) The CitroÃ«n dancing transformer also comes in an antique edition and 2) making commercials about dancing cars can’t be that hard, and the original one is most certainly not real:

People were stunned. The original dancing car wasn’t real! You heard it! Not! Real! In an effort to quell the masses, CitroÃ«n autos has commissioned Chico to build a real, transforming, breakdancing robot:

Ok, maybe I made most of that up, and maybe the art doesn’t breakdance, but Dan took a picture of him in the totemobile and turned it into a bitchin’ animated gif, complete with muppet arm:

So you took a picture of some cool looking graffiti and it has piqued your interest. You want to know what it means, where it came from, and who put it there. Gone are the times when tags were a mysterious, obfuscated communication only to be understood by other artists and anthropologists. These days, you can be your own graffiti researcher with the simple use of Flickr. Here’s how it works:

1. Snap a picture of the tag. Here’s one I took the other day: 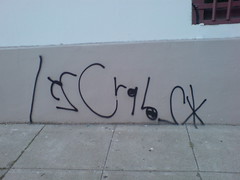 2. Decipher the tag. This can vary in difficulty. If you’re not blessed with tag-deciphering skills, you can ask one of your more graf-savvy friends, or ask the Wooster Collective. In my case this is simple; I’m dealing with someone named “les crabs.”

3. Search on Flickr for the name. Also look at the Flickr tag for the name. If you come up with a big list of graffiti photos, you’re on the right track. If not, try adding the word “graffiti” to your query.

4. Do some research. Look at the other photos and take note of the Flickr tags, titles and comments. Graffiti photographers will usually give some details about the location. I see that les crabs is most prolific in San Francisco, but has also been seen in Oakland and Brooklyn: 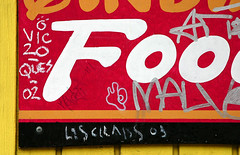 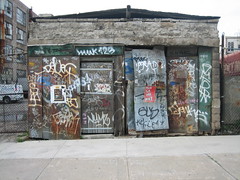 5. Upload your photo to Flickr. Add tags it with the city and the the name of the artist, maybe even geotag it. Be proud of the fact that you’ve joined the ranks of graffiti anthropologists around the world.

John Maeda recently opened a new exhibit in NYC based around the topic of food. The work is currently being displated at the Cristinerose Gallery, which also hosted Maeda’s last big show, Post Digital, in 2000. I was interested to see what the critical response was to his newest stuff (which I find much more clear and cohesive than Post Digital), but no one has uttered a peep so far.

The exhibit started last week and will be up through January 18th. The gallery also has some selected photographs of Maeda’s work from this exhibit and Post Digital.

Design, buy and sell your own pixel-perfect t-shirts at pixeltees.com. Quite an impressive assortment of geek-chic styles (and just in time for Christmas!) [via k10k]

One of the great parts about having friends in town is the excuse it gives you to drag them to all sorts of places you always want to go, but never have the time. At the top of my list was the MIT Museum, which is just down the street, and offers free admission, but somehow kept slipping through the cracks in my schedule.

The space is equally divided into five areas: robots, Arthur Ganson, Harold Edgerton, holography, and MIT history/culture. Every exhibit is fascinating, and could easily be in a gallery or larger museum, but without a doubt, Ganson takes the show. Some of the highlights:

If you’re ever in the Boston area, this exhibit is well worth checking out. Many of his gadgets are so surreal (Inchworms, Machine with 23 Scraps of Paper) are truly indescribable, and need to be seen in person. At $5 (or free if you’re with an MIT student), it’s money well spent.

michel gondry has been getting quite a bit of attention for his recent lego-riffic white stripes video (after similar attention for videos such as daft punk’s ‘around the world’, just about every bjork video ever, and one of my personal favorites, ‘sugar water’ by cibo matto).

he has an upcoming feature-length movie, human nature which features a pretty surprising cast including tim robbins and patricia arquette. the previews place it somewhere between the animal and clockwork orange. given his infallible mtv history, it’s guaranteed to be at least visually gratifying.